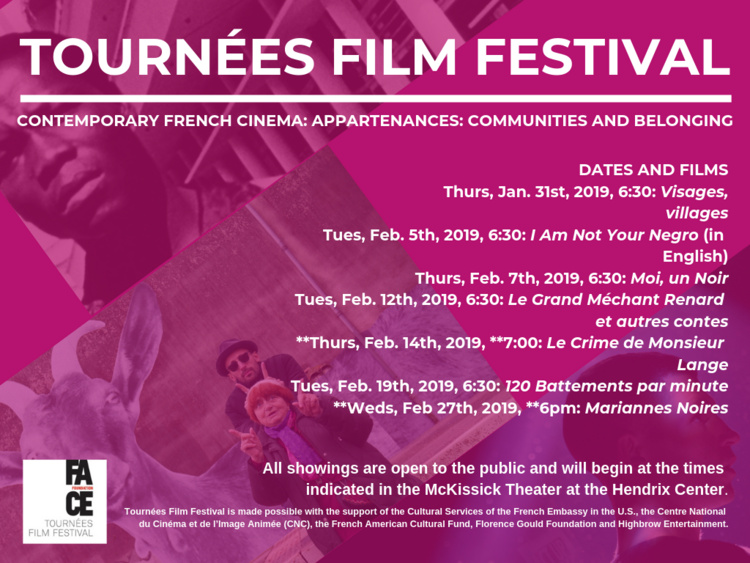 This series features a variety recent French films that focus on various kinds of communities and the modes by which individuals connect or belong to them. The great director Agnès Varda takes a look at village life (Visages, Villages). Two films examine the relation between individuals and cultural constructions of race: one, a biopic of James Baldwin (I Am Not Your Negro), the other, an influential collaborative film made in the Ivory Coast (Moi un Noir). Other films range from an animated comedy for audiences of all ages (Le grand méchant Renard), to a classic of socially committed cinema (Le crime de Monsieur Lange), to an award-winning epic on the founding of the HIV activist group ACT UP Paris in the 1990s (120 battements). (see http://face-foundation.org/tournees-film-festival/ for more information on each).

All French-language films are subtitled.

All showings are open to the public and will begin at the times indicated in the McKissick Theater at the Hendrix center.

“Tournées Film Festival is made possible with the support of the Cultural Services of the French Embassy in the U.S., the Centre National du Cinéma et de l’Image Animée (CNC), the French American Cultural Fund, Florence Gould Foundation and Highbrow Entertainment.