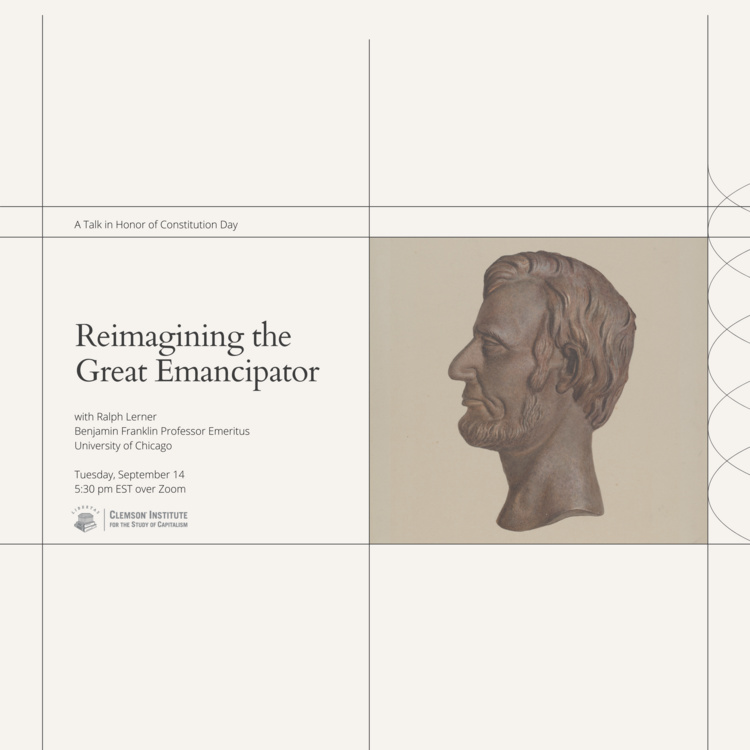 Our point of departure is to try to account for Lincoln’s continuing presence in our national consciousness. We are prompted to wonder how such an individual—and an imperfect one at that—shaped himself to such an extent that he could then go on to shape the sentiments of his countrymen. His moral vision was clear, his mode of acting was deliberate and patient. And the example of his own rise from obscurity and poverty served him to show the truth and relevance of the axioms of a free society as enunciated in the Declaration of Independence. If Jefferson’s abstract truth was indeed “applicable to all men and all times,” then Lincoln’s greatest effort was to make sure we never forget that.

On Tuesday, September 14 at 5:30 pm EST (4:30 pm CST), join the Clemson Institute for the Study of Capitalism (CISC) for a talk with Ralph Lerner, Benjamin Franklin Professor Emeritus in the College and the Committee on Social Thought at the University of Chicago.

This talk is in honor of Constitution Day, which occurs later in the week on September 17. It has been made possible with generous support from the Jack Miller Center. This event is free and open to the public.

Ralph Lerner attended public school in Chicago, received his degrees in political science at the University of Chicago, and had a year of post-graduate study of medieval Hebrew at the University of Cambridge. He has served in the U.S. Army. He has received fellowship awards from the Rockefeller Foundation and the National Humanities Center. He has received a Quantrell Award for excellence in undergraduate teaching. His books include The Founders’ Constitution (co-edited with Philip B. Kurland), The Thinking Revolutionary: Principle and Practice in the New Republic, Revolutions Revisited: Two Faces of the Politics of Enlightenment, and Maimonides’ Empire of Light: Popular Enlightenment in an Age of Belief. He is the author, most recently, of Naïve Readings: Reveilles Political and Philosophic.