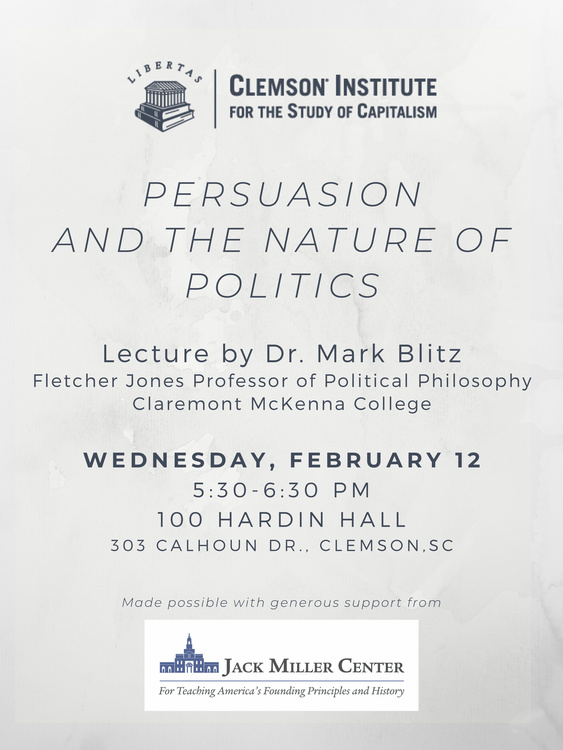 Persuasion and the Nature of Politics

Persuasion is important in any political regime that relies on compromise, diplomacy, and competitive elections.  What makes it possible and effective?  What are its limits?  And, what does using it teach us about the place of reason in political life?

On Wednesday, February 12, Dr. Mark Blitz will deliver a talk on "Persuasion and the Nature of Politics."  This lecture is part of the Lyceum Speaker Series hosted by the Clemson Institute for the Study of Capitalism (CISC).  This lecture has been made possible with generous support from the Jack Miller Center (JMC).  This event is free and open to the public.

The mission of the CISC is to explore the moral foundation of capitalism. Liberty or freedom is central to this foundation, and so, in pursuit of this mission, we teach, we write, we give scholarships, and we host public lectures dedicated to exploring the moral, political, and economic foundations of a free society.

Dr. Mark Blitz is Fletcher Jones Professor of Political Philosophy in the Government Department at Claremont McKenna College and a Fellow of the Claremont Institute.  He previously served as the Director of the Henry Salvatori Center at Claremont McKenna College.  Dr. Blitz is the author of Plato’s Political Philosophy, Conserving Liberty, Duty Bound: Responsibility and American Public Life, Heidegger’s Being and Time and the Possibility of Political Philosophy, and the coeditor, along with William Kristol, of Educating the Prince: Essays in Honor of Harvey Mansfield.  During the Reagan Administration, he served as Associate Director of the United States Information Agency and as Senior Professional Staff Member of the Senate Committee on Foreign Relations.  Dr. Blitz also served as Vice President and Director of Political and Social Studies at the Hudson Institute.  He holds an A.B. in Government and a Ph.D. in Political Science from Harvard University.

Centers and Institutes, Study of Capitalism

Travel on Calhoun Drive for 0.13 mi