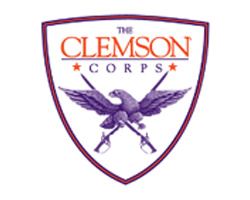 A memorial ceremony remembering those who have fallen in service to our nation will be conducted Memorial Day weekend.  The service, scheduled for 4 p.m. Sunday, May 30, will feature remarks by Col. Mike Mendonca US Air Force (Ret.).,  chair of the Clemson Corps, a constituency group of the Alumni Association dedicated to the preservation of Clemson’s military heritage.

The ceremony will include the unveiling of a new stone in the Scroll of Honor Memorial remembering Spec. 4 Philip Aaron Porter, who died from service related illness in April 2020.

Porter, who grew up in Pickens, served in the Army’s elite 75th Ranger Regiment and was deployed as part of the United Nations’ peacekeeping force to Somalia in 1993.  When injury cut short his Army enlistment, Porter enrolled at Clemson to pursue a degree in horticulture with a minor in urban forestry.  He graduated in 2000.

The addition of Philip Porter brings the number of names on Clemson’s Scroll of Honor to 494  To be listed on the Scroll of Honor, one must be a Clemson alumnus and have died while performing military duties or as a direct result of those duties.