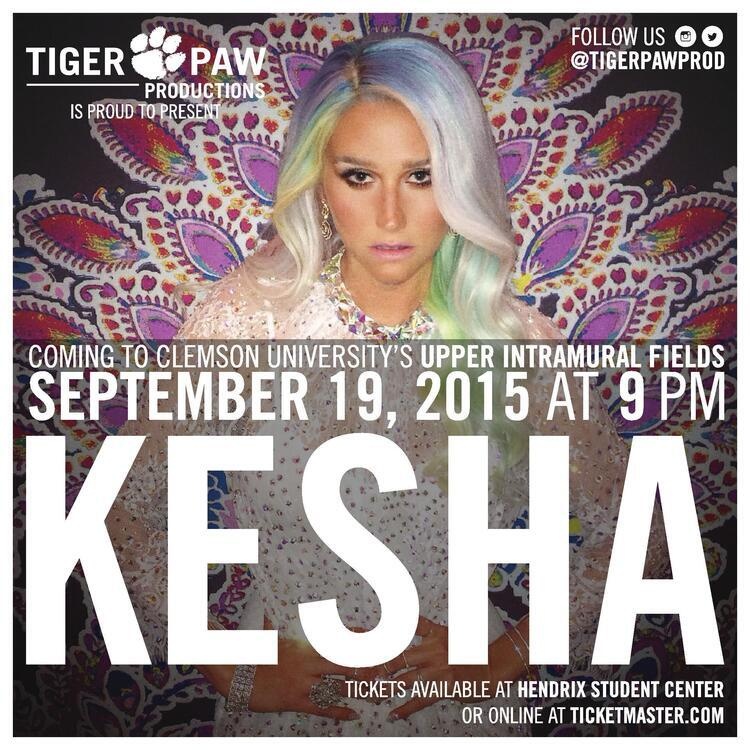 TigerPaw Productions announced that international superstar Kesha will perform on the Upper Intramural Fields in the heart of Clemson University's campus on Saturday, September 19, 2015. Tickets will be available to students beginning at 10 a.m. on June 18 and to the public beginning at 10 a.m. on June 19 at the Hendrix Student Center Box Office and online at ticketmaster.com.

Kesha has taken the world by storm since the release of her debut album Animal in 2010.  That year she was declared Billboard's Hot 100 Artist and her smash debut single "TiK ToK," named Billboard's #1 Hot 100 Song, was the most played song of that year, and was the biggest-selling digital track in the world. Kesha has had eight consecutive Top 10 hits including four #1 singles: "TiK ToK", "Your Love Is My Drug", "We R Who We R" and most recently “Timber.” “Timber,” a collaboration with Pitbull, peaked at #1 on the Billboard Hot 100 singles charts, Top 40 charts, UK charts, European singles charts, and Spotify, was nominated for a Billboard Music Award for Top Rap Song, an MTV Video Music Award for Best Collaboration, and won the 2014 iHeartRadio Music Award for Best Collaboration.

This single has sold over 4 million copies in the U.S. and over 3.7 million copies internationally reaching #1 on iTunes in over 66 countries. Kesha has more than 30 million Facebook likes, more than 3.6 million Twitter followers, and close to a billion views on YouTube. Between her debut album Animaland her last release Warrior. Kesha has sold over 4 million units worldwide. Kesha has toured the world, playing over 250 live shows in support of Animal and its companion album Cannibal and an additional 47 shows in support of her latest release, Warrior. She took home the MTV EMA for Best New Act in November 2010 and was nominated for 2 American Music Awards, 4 MTV VMA Awards and 6 Billboard Awards.

She has sold over 35 million combined tracks and ringtones in the U.S alone and over 59 million worldwide to date. Kesha is an international powerhouse, Animal has been certified Gold, Platinum or multi-Platinum in 16 markets (including Platinum in the United States and Double Platinum in Australia & Canada) and was the biggest selling debut album from an international female in 2010 in the UK. In the Fall of 2012 Kesha released an illustrated photo journal and scrapbook entitled “My Crazy Beautiful Life” with Touchstone. The book was a huge fan hit and was a precursor to her wildly successful MTV Show “Kesha: My Crazy Beautiful Life” which was the #1 series across all TV in the time period with P12-34.

In August 2013 Kesha launched her own jewelry line, Kesha Rose by Charles Albert. The line, which is entirely designed by Kesha, is based upon her love of nature and classic rock & roll style. Last summer Kesha joined artists Ludacris, Brad Paisley, and Josh Groban as an expert on ABC’s new singing competition series “Rising Star,” which premiered on June 22, 2014 on ABC.  The premiere of “Rising Star” opened as ABC’s highest-rated summer series debut in 2 years in Adults 18-49 and was the No. 1 most-social broadcast series of the night. This series on average drew 4.6 million viewers and ranked as the No. 1 broadcast program in its Sunday time period with Adults 18-49.