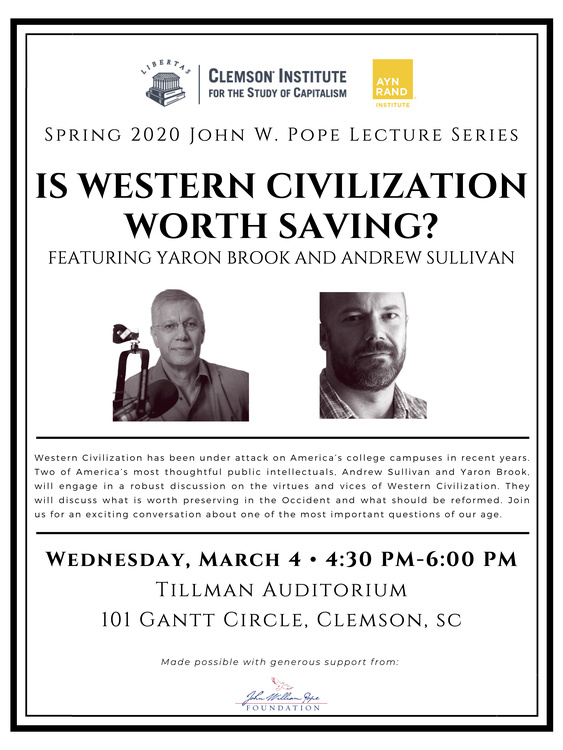 Is Western Civilization Worth Saving?

Description: The Spring 2020 John W. Pope Lecture Series is co-hosted by the Clemson Institute for the Study of Capitalism (CISC) and the Ayn Rand Institute (ARI). Yaron Brook and Andrew Sullivan will have a conversation centered around the question, "Is Western Civilization worth saving?" This event is free and open to the public.

For more information and to register, please visit the event page.

About the CISC: The mission of the CISC is to explore the moral foundation of capitalism. Liberty or freedom is central to this foundation, and so, in pursuit of this mission, we teach, we write, we give scholarships, and we host public lectures dedicated to exploring the moral, political, and economic foundations of a free society.

About ARI: ARI fosters a growing awareness, understanding and acceptance of Ayn Rand’s philosophy, Objectivism, in order to create a culture whose guiding principles are reason, rational self-interest, individualism and laissez-faire capitalism­­—a culture in which individuals are free to pursue their own happiness.

About Yaron Brook: Yaron Brook was the Executive Director of The Ayn Rand Institute (ARI) for 17 years (2000-2017). He remains Chairman of the Board of ARI and its primary spokesperson. Brook is co-author, along with Don Watkins, of Free Market Revolution: How Ayn Rand’s Ideas Can End Big Government, Equal Is Unfair: America’s Misguided Fight Against Income Inequality, and In Pursuit of Wealth: The Moral Case for Finance. He is also contributing author to Neoconservatism: An Obituary for an Idea, as well as Winning the Unwinnable War: America’s Self-Crippled Response to Islamic Totalitarianism, and Big Tent: The Story of the Conservative Revolution—As Told by the Thinkers and Doers Who Made It Happen. Brook was a columnist at Forbes.com, and his articles have been featured in the Wall Street Journal, USA Today, Investor’s Business Daily, and many other publications. He was born and raised in Israel, where he served as a first sergeant in Israeli military intelligence. Brook earned a BSc in civil engineering from Technion-Israel Institute of Technology in Haifa, Israel. In 1987 he moved to the United States, where he received his MBA and PhD in finance from the University of Texas at Austin; he became an American citizen in 2003. For seven years Brook was an award-winning finance professor at Santa Clara University, and in 1998 he cofounded BH Equity Research, a private equity and hedge fund manager, of which he is founder and director.

About Andrew Sullivan: Current Contributing Editor at New York magazine, blogger, and author Andrew Sullivan is a popular source of provocative, astute political and social commentary. The New Republic’s youngest editor-in-chief, Sullivan was acknowledged for making the magazine more relevant to his generation. He was named Editor of the Year by Adweek and received multiple National Magazine Awards. After working for Time and The New York Times Magazine, Sullivan served as a senior editor for The Atlantic. From 2000 to 2015, he chronicled every major political and cultural moment in real time on his blog, The Dish. Joining New York magazine as contributing editor in 2016, Sullivan covers politics and culture, and occasionally writes features, such as his coverage of the 2016 Democratic and Republican National Conventions. Also in 2016, he announced two new books: Keeping the Faith, a spiritual memoir about the future and meaning of Christianity in the 21st Century, and a 30-year retrospective of essays, reviews and posts entitled Thinking Out Loud. One of its earliest activists, Sullivan set the gay rights movement’s agenda with two landmark works: 1995's Virtually Normal: An Argument About Homosexuality and 1989's “Here Comes the Groom: A (Conservative) Case for Gay Marriage.” He also argued for a conservatism based on practical restraint, individual freedom, constitutional norms, and skepticism in The Conservative Soul: Fundamentalism, Freedom, and the Future of the Right. A practicing Catholic, Sullivan has challenged the Church's position on gay life. He is an Oxford graduate and received his PhD from Harvard University.

Centers and Institutes, Study of Capitalism